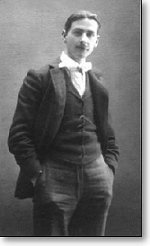 1877-1917 Tom Thomson, born near Claremont, Ontario; the family moved to Leith near Owen Sound, where he grew up. He became a machinist's apprentice in 1898 and later attended business school at Chatham, Ontario. Lived at Seattle, Washington, 1901-1905, where his brother George Thomson ran a business school; there he first worked at photo-engraving and advertising design and began to sketch in crayon and water colour. Returned to Toronto in 1905 and worked at photo-engraving; joined Grip Limited in 1910 and was there associated with MacDonald, Lismer, Varley, and Carmichael. Worked for Rous and Mann, Toronto, 1912-1914, and in 1914 he was enabled by Dr J.M. MacCallum and Lawren Harris to devote his full time to painting. Lived in a shack beside the Studio Building, Toronto. Exhibited his first canvas in 1913. Was at Canoe Lake, Algonquin Park, with Jackson, Lismer, and Varley in 1914. From 1914 to 1917 he spent most of the year in Algonquin Park, returning in the winters to Toronto to paint the few canvases which he completed. Was drowned in Canoe Lake in July 1917 and was buried at Leith, Ontario. A cairn was later erected to him at Canoe Lake.